Although it’s called a summer camp, Sherwood Forest goes above and beyond the traditional camp experience. Mary Rogers graduated from the camp in 1970; she’s never truly left, though.

Rogers is now executive director of Sherwood Forest, which provides educational and camp experiences for children from low-income families. At camp, the kids take part in educational programs that are specific to each grade level, as well as activities of their choice such as aquatics, creative and performing arts, sports, STEM, and “ideas,” which blends academic learning with the camp setting. 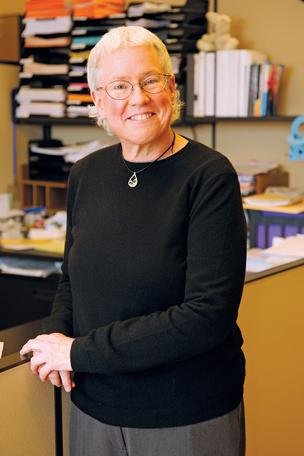 Sherwood Forest’s connection to the children goes beyond those 28 days over the summer. Not only does the organization maintain relationships with the kids during the school year, but Sherwood Forest also engages in outdoor education programs with local school districts. Through this program, which they introduced to St. Louis in 1948, Sherwood Forest brings the camp experience into the school curriculum.

The camp often leaves its graduates inspired. Most come to Sherwood Forest from environments where college doesn’t seem possible. Rogers strives to change that. She’s also found that, when reconnecting with former campers, most no longer live in impoverished or low-income circumstances.

Rogers attended the camp herself in 1967 when her social worker, through Catholic Family Services, suggested that her widowed mother send her and her sister, Annie, to camp. At 13 and 12 years old, Rogers and her sister spent their first summer at Sherwood Forest and both attended until they graduated from the program, which for Rogers, was in 1970.

She then worked at Sherwood Forest through high school and college and became camp director when the facility moved from its location in Cuivre River State Park to Lesterville, Missouri, in 1981. As camp director, her desire to help the children from low-income families and less-than-ideal situations grew.

Rogers says, “I was really challenged as camp director to figure out, how do we actually provide a camp experience that is most meaningful and fun for our kids, but also helps them?”

To answer her questions, Rogers got her master’s degree in education from Harvard University—taking a year off and missing the only summer the camp has seen without her since she came as a child.

Although her year at Harvard left her with more questions than answers, Rogers continued to work at Sherwood Forest, and in 2002, took on the position of executive director.

Rogers isn’t the only former camper that maintains such strong connections with Sherwood Forest. From just her graduating class of 1970, three people, including herself, still remain a part of the Sherwood Forest family. Gary Chastain has served as the facilities director since 1981; and Dr. Alice Miller, PhD., or “Tweety” to campers, serves on the board of directors.

Since Rogers’ time as a camper, Sherwood Forest still maintains its original foundation of helping children from low-income families.

Due to the low incomes of Sherwood Forest’s families, the program generates little revenue from the families themselves. Instead, the camp is funded mostly through community support. Right now, the camp is running a capital campaign called, aptly, Way More Than Camp. Donations can be made online.